in town, Kanab, Utah, there are some new chain hotels that are pet friendly such as Comfort suites, Holiday inn, and Hampton inn with pet fees of $10 or twenty per pet per night and also a few others that are not chains such as Parry lodge, which also has a coffee shop. if you are visiting Best friends, it is easier to get around by staying right in kanab. there are other properties that are twenty or thirty miles away. these are pet friendly but then you have to drive forty to sixty miles a day, if you are volunteering.

The prices from April until September, high season, are higher than at other times of the year. The weather in the summer can be very humid and hot. Cici and I visited during mid-March and it is already in the 80’s, the prices are not so high and there are not as many tourists, although as we drove through Zion, it was pretty filled up and crowded with hikers.

Please call the Best Friends Welcome Center at 435-644-2001, ext. 4537 or email them at welcomecenter@bestfriends.org  and ask to be scheduled on a tour.

I asked about the rest of the Vicktory Dogs who are still there. The Welcome Center does include info about them during the tour.

This is what I was told.
“One of them is court-ordered to stay here for life and the other three  have special circumstances that make it likely that they will live out their lives here which is just fine with their caregivers who love them. The Vicktory Dogs who are still here are not comfortable with strangers so actually meeting the dogs isn’t possible. Mya and Curly are extremely shy. Next January will be the 10th anniversary of their arrival here. So time is marching on. Out of the 22 who came to Best Friends, we are happy that 13 of them were able to be adopted.” 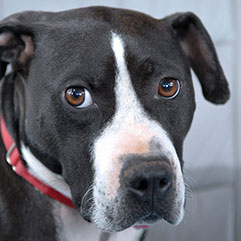 I also visited the little store that BFAS has in town because they had a sign that said cat cuddling. i WAS game.  there were only two cats in there but one of them reminded me of my baby boy Abundance, a black cat with some white on his chest and paws. Had not expected that. Touched my heart.

Also got to spend some time chatting with Kevin Johnson, now retired, who used to work at BFAS, his wife still does. They adopted Ray one of the V-dogs, who passed a couple of years ago. Now they have three other pit bulls, Bosco, Bubba and Turtle and numerous parrots and a cat. Each have their own challenges. We shared pit bull stories and specific instances of dogs and love and opportunities of being a guardian of the furry creatures. Of course, Cici slobbered all over Kevin’s legs and showed off her belly.

On April 25th, 2007, police served a warrant in Surry, Va. The day before, Michael Vick’s cousin, Davon Boddie, was arrested on drug charges and listed the house as his address. The police and animal-control officers found 66 dogs and what appeared to be a dog-training complex of dark-painted buildings in the woods just behind the house owned by M. Vick. Police obtained another warrant and seized the dogs.

This photo is of the dogs rescue from the property. Thankfully, there were people who began the fight for the V Dogs lives. And thus began the journey for a collective group of dogs who would change the perception people had of pit bulls and fighting dogs and the laws that would one day open doors for countless dogs worldwide.

Happy 5th year anniversary to all of the Vicktory dogs, their pet guardians, foster parents and trainers, all of the folks who have loved them and been with them every step of their amazing journeys… BadRap, Best Friends, Our Pack, Monterey SPCA and others, the dogs could not have made it without ALL OF YOU. 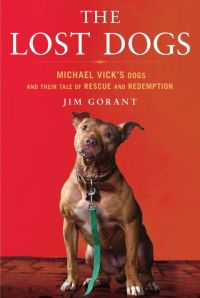 If you have not read the book about these dogs, it is time to honor the dogs by getting a copy of The Lost Dogs by Jim Gorant and reading it or giving it as a gift to your local shelter, a friend or loved one. This book will warm your heart and uplift your spirit. Yes, there are a few rough paragraphs to get through. But in the end, the story is one of tremendous courage, triumph and spirit. Against all odds, despite PETA and the Humane Society and others insistence that the dogs be euthanized, most of the dogs have not only survived but are thriving in homes with other dogs, cats, children and continue to inspire others. Eight of the dogs have become therapy dogs, visiting sick people and reading with children, have won awards and given the key to the city. A few of the dogs have passed onto the Rainbow Bridge. Some of the pet guardians do speaking engagements and events. And a few have rescued other pit bulls who needed love and homes, too.

Oscar just passed his CGC. He is an official Canine Good Citizen and is now eligible for adoption (has a pending home).

Ginger having her cake and eating her Happy cake, too… 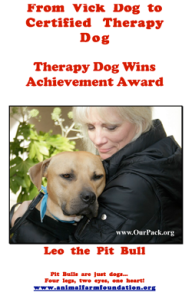 What have you learned from these survivors of cruelty? How has this landmark case influenced your views on evaluating victims of cruelty? What have these dogs taught you about the importance of “seeing the dog, not the story?

Blog Hop time…  thanks to Life with Dogs,Two Little Cavaliers and Confessions of the Plume…  grab the blog hop code…